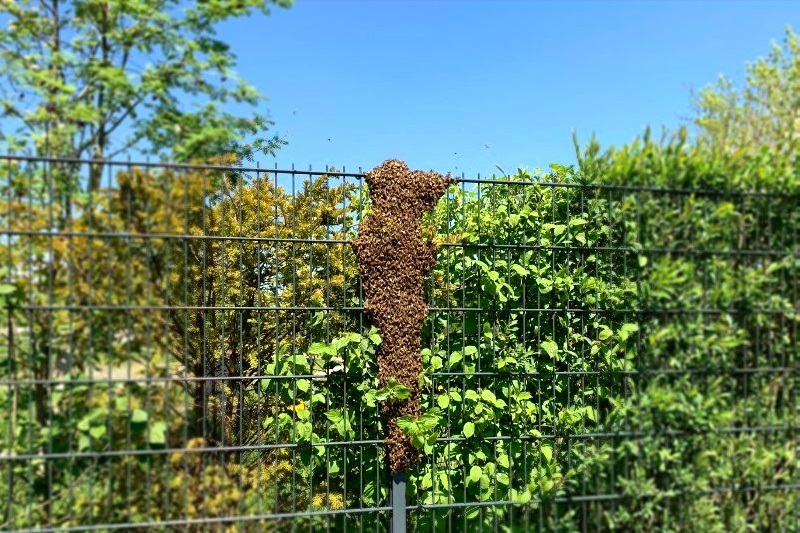 Swarming is a bit like a desire to be elsewhere…

Boredom seems to be an unfamiliar word to bees. When this happens, what better way to start the conquest of a new home and start a new vibrant life elsewhere. As you can see, this month we are talking about swarming.

This year’s spring harvest is definitely compromised. The temperatures of the last few weeks have been like a rollercoaster and have not benefited our bees, who have missed out on the flowering of rapeseed, one of the main sources of nectar in our region in spring. The cold and the rain have led them to remain cloistered in their hive.

The bees, which are very active and wear many hats (layers for the queen, cleaners, feeders, ladies-in-waiting, waxers, ventilators, honey producers, scouts, foragers and guardians), were thus left out of work because of the cold.

In May, there are also the Saint de Glaces (11-13 May), which are well on schedule this year.

It must be said that this spring of 2021 is really special according to MeteoSwiss:
« Regionally, the average minimum temperature of the last ten days was the lowest for the month of April for almost 20 years » (publication of 14 April 2021).

As a result, the bees are bored because they don’t have much to do. So what do they do to kill boredom? They prepare to conquer a new home, elsewhere, but never far from their original hive.

To do this, they raise a new queen and form a new colony. Gorged with honey, they leave their original apiary in large numbers and settle temporarily on the branches of a nearby tree, a bush or a fence, as was recently the case on The Hive site in Meyrin, while waiting to find a new place that suits them or for a beekeeper to collect them and install them in a new hive.

This is a very impressive phenomenon, but there is virtually no danger. If you see a swarm, however, you should call in professional beekeepers to collect it.

Like this year the weather, or the age of the queen, the honey flow and the lineage of the bees are all factors that can lead to swarming.

Swarming can be prevented by creating artificial swarms when beekeepers perceive warning signs such as the inversion of the area of open brood to that of closed brood and the presence of queen cells. Indeed, according to the great master of beekeeping Jean Riondet « when there are more young bees in the hive than bees foraging outside, the hive can become disorganised leading to swarming. « . Unfortunately, the weather prevented our beekeepers from making all the necessary visits to detect these warning signs.

This is clearly a time of year when the balance of the hive needs to be closely monitored due to the heavy laying of the queen, who may be losing her vigour. In many of our hives we see that her egg laying is already down to about half of what it should have been at the same time.

It is also to ensure the survival of the colony that the workers raise a new queen and prepare a swarm.